Swinging for the Bleachers – The Case for Experimenting Aggressively

How would you play baseball differently if the cost of swinging and missing was tiny, i.e. 100 strikes and you’re out, not 3?  My guess is you’d change style and swing more aggressively, more often, because the odds of you striking out have changed dramatically in your favour.  The downside odds change, and you change your game.

A Traditional and Wrong Headed Way to Look at New Initiatives

Here’s how we commonly think about the risk and return of new initiatives. 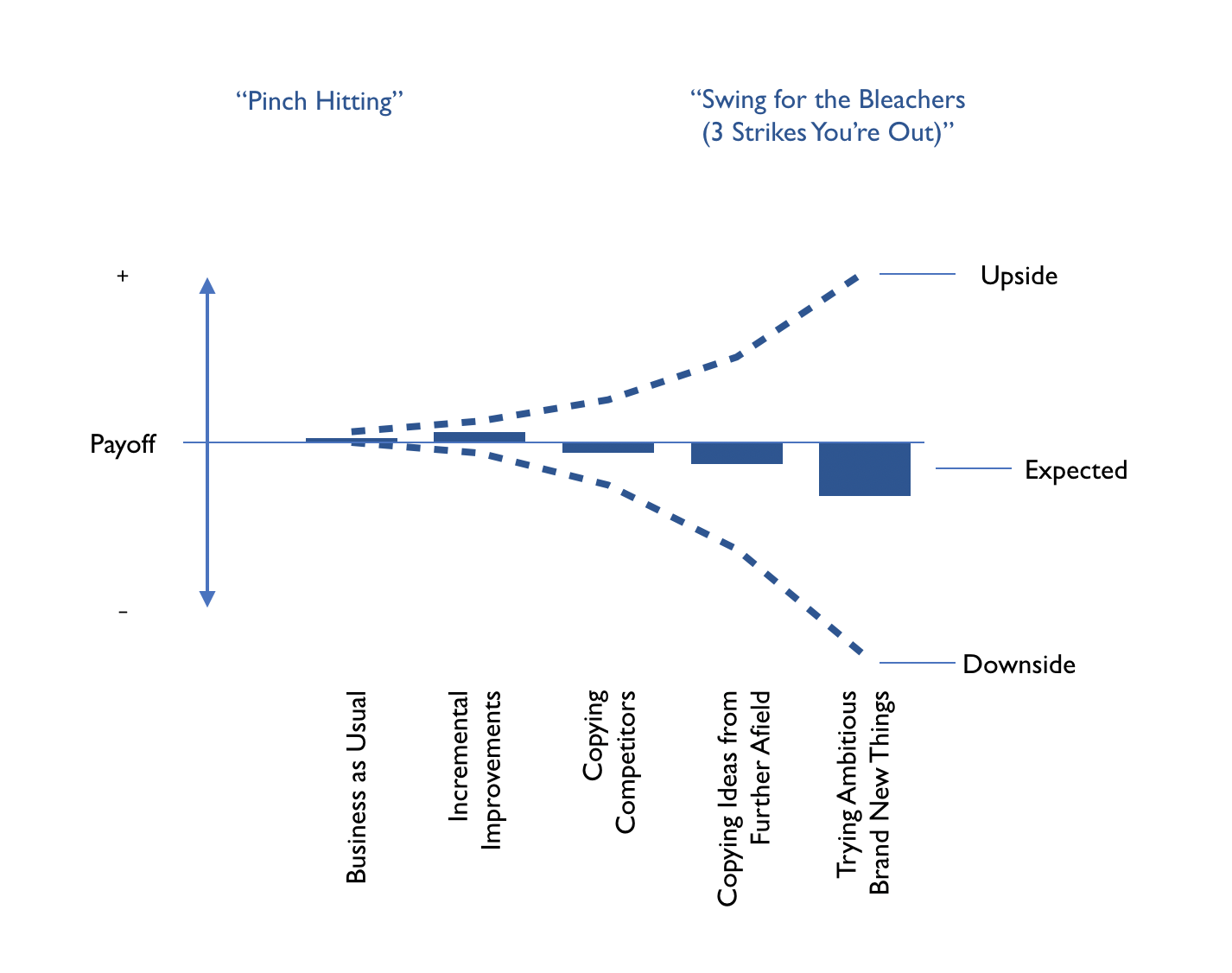 As we try things that are further from business as usual, our expected pay off goes down because it becomes increasingly unlikely that the initiative will come off.  Worse, and much much more importantly, the variability of the outcome and the associated downside get scarily bigger and bigger – and if we play that dangerous game and lose, we die.  This is how we become conservative tinkerers, searching for sure things and low risk piecemeal improvements.

This way of thinking is, of course, completely wrong.

A Smart Way of Thinking About New Initiatives

Instead of thinking of trying new things as a one step game, where we go all in and lose a third of a life if it doesn’t come off, we need to think multi-step.  In a multi-step approach we might research the case for doing something, learn, then experiment in a tiny way, learn, experiment in a bigger way, then roll out all guns blazing.  If at any stage it looks unattractive, we pull without losing very much; if it looks good, we open the taps.

As long as the cost and delay of experimenting is small, we can afford several dozen misses and we’ll still be OK.  This completely changes our our expected return, and the ambition of the projects we pursue, because variability has morphed from our enemy into our friend.  The more we stretch ourselves, as long as we test and adjust, the better is our return.  Fortune now really does favour the brave.

Yes, we know that business experiments aren’t a new thing.  Lots of businesses experiment, and that’s fine; but they’re mainly doing it by tinkering with business as usual where the variance and payoffs are small.  The same business that obsessively and relentlessly A/B tests the positions of buttons on user interfaces has never trialled a whole new staff compensation structure or tested even one or two changes to its core pricing model.  Unless you’re running thousands of experiments a year, like Netflix and Amazon, you’re much better off experimenting at the aggressive end.

We still need our business as usual because we need to survive until next year, and benefit from the results of our beautiful experiments.  But our growth comes from stretching ourselves and trying out new things.  If we don’t, we’ll be well beaten by people who are smart enough to swing for the bleachers when the glory should be ours for the taking.

Photo by Tim Eiden from Pexels